Method overloading is simply the process of being able to pass different types of parameter into what appears to be the same method. Consider System.out.println(). This method can take a number of different types 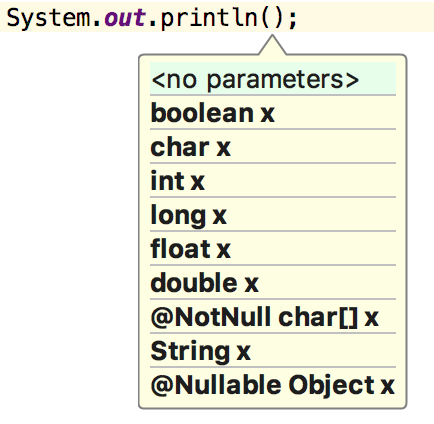 To implement method overloading we simply create methods with the same name, but vary the parameters, for example consider the following code:

The methods have the same name, but they have different parameter lists. They could be used as follows:

Sometimes it is useful to be able to chain the overloaded methods. This can help avoid duplicated functionality. For example, in the above code, should the symbol for the British unit of currency (£) be changed, we would have to update code in two places. An alternat solution might be for the method that takes an int parameter to convert it to a double and then call the method that takes a double. It could therefore be re-written as follows:

The principle of operator overloading can also be applied to inherited types. Consider that a class Edam extends a class Cheese, and a Halloumi class does also. The below example class shows we can use overloading to differentiate between Cheeses. (Note that the example is not a particularly good example - it would normally be better for the Cheese class and its subtypes to implement some sort of 'describe' method):

We could then use the code as follows:

In each case the description would simply be "Made with milk". This is because type that has been declared (in this case Cheese) is used when determining (when the programme is compiled) which overloaded method will be called.