This tutorial assumes you have already download, installed, and configured Android Studio and either setup an Android Virtual Device, or have configured an Android Device for running applications

Components of an Android Application 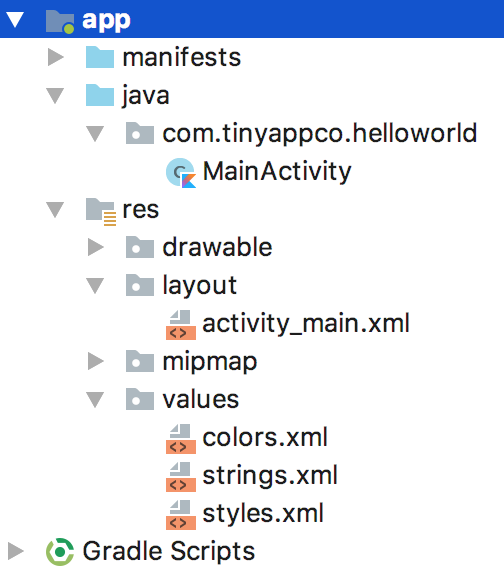 .An Android application is composed of various parts, these can be seen by expanding the folders in the project navigator. Key components include:

Making the button do something

There are a couple of improvements that can be made. Firstly, you might be wondering how we would handle multiple buttons, as there is only one onClick method. As the view that is clicked is passed as a parameter into this method, we can check which one it is. The code for this would appear as follows:

The code needs a little explaining as it's unusual to need to write == true to check if a value or result of an expression is true. It's required in this case, because v represents a nullable View, and we have used a safe call (designated by ?.) to the equals method. The expression v?.equals(btnGreet) evaluates to a nullable Boolean, which will either be true, false or null. Because an if statement requires a non-nullable Boolean value (or expression), we have to check for equality with true

We could leave it there, but there is a simpler way to add the on-click listener. The setOnClickListener method takes anything that implements the OnClickListener interface as it's parameter, so, rather than passing in the Activity we can declare an inline anonymous object which does the same. This results in code as follows:

The onClick method from the Activity, along with the interface adoption code should now be removed

This has already simplified our code somewhat, but we can simplify it further. Kotlin permits an optimisation whereby given a function that has an interface as it's parameter, if that interface has a single function, the function can be passed in instead, as follows:

This can be simplified even further as we are not using the view parameter it can be removed, and it is also permissible to remove the parentheses, thus the simplified version appears as follows:

Excluding import statements, the code for the MainActivity class is as follows:

In order to truly appreciate the value of String resources, we will now internationalise our application

Create a new Android application, similar to the one above, but with the addition of an EditText element above the Button. Add functionality so that the TextView displays "Hello World" by default (or its German equivalent if the device language is set to German), "Hello Android" if the button is pressed and the TextView is empty (again with German string provided), but, if the EditText contains user supplied text, display "Hello " followed by the user's name (or the German equivalent). Some further reading (and a translation service) may be required in order to do this.